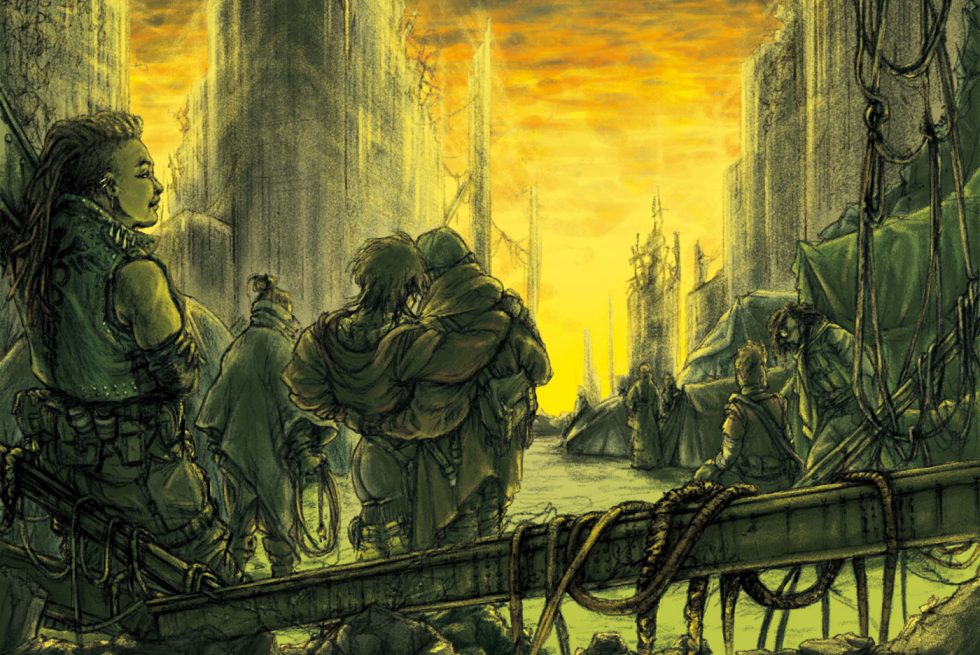 Looking over her sheet once more, the next player begins, “Alright, my name’s Depot. I’ve got skittish eyes and greasy hands. My gender is raven, though I haven’t figured out exactly what that means yet. As for my workshop, I specialize in a mixture of hydroponics and bicycle repair.” It’s going to be a different sort of post-apocalypse than we’ve seen before: strange, hopeful, and intimately human.

Dream Askew is a tabletop roleplaying game by designer Avery Alder, launching on Kickstarter on May 15th. It brings people together to tell stories about what queer community might look like amidst the collapse of civilization. While many roleplaying games sport intricate rules for rolling dice and adding up skills, Dream Askew keeps everything pared down to simple narrative prompts. “I designed this game with beginners in mind, because I want to see a more diverse group of people at the gaming table,” says Alder. “This is a no dice, no masters approach to roleplaying that hinges on collaboration.”

Dream Askew was developed in dialogue with another game, one which takes its underlying themes and tempo in an entirely different direction—Dream Apart, a game of Jewish fantasy in the shtetl. Picture a small market town nestled in the nineteenth-century Eastern European countryside. As the players introduce their characters one by one, that setting slowly comes to life. “My name is Miriam, the midwife. I have strong hands, a remarkable sense of smell, and unending patience. I’m a Nachmanidean, for what rational explanation could there be for the strange things I’ve seen? I once helped a woman give birth to a wolf cub.”

“Avery’s elegant, approachable system was the perfect fit for my game,” says Rosenbaum, the designer of Dream Apart. “I wanted to get beyond the clichés of fantasy roleplaying, and capture the mystery, the sly humor, the defiant resistance, and the ambivalent longing of Yiddish folktales. These games balance the fantastic and the human; the social struggles within a community, and the looming threat outside it. They provide a new mirror, a different view.”

Alder’s games have previously won Indie RPG Awards and been shortlisted for Golden Geek, Lucca Comics & Games, and Origins Awards. Rosenbaum is a newcomer to game design, but his fiction has been nominated for the Hugo, Nebula, World Fantasy, and Locus awards, and translated into twenty languages; Michael Chabon once numbered him “among our most interesting writers of literary short fiction today.”

The two games are being released together as a single volume, highlighting their shared theme of belonging outside belonging. “There’s a lot of contrast between these two games – one is Jewish historical fantasy, the other is queer speculative fic. But at their core, they’re both games about marginalized people finding agency and building community,” says Alder.

The Kickstarter just went live: check it out now!