I’ve had the honour of being invited onto stages across North America and Europe, to share my ideas on roleplaying games, queer identity, imagination, and design. Some of the talks listed below have video, while others simply link to my slides and outline. I’m in the process of recording and transcribing those talks that weren’t properly captured when first delivered.

Want to bring me in to give a talk? Learn more here. 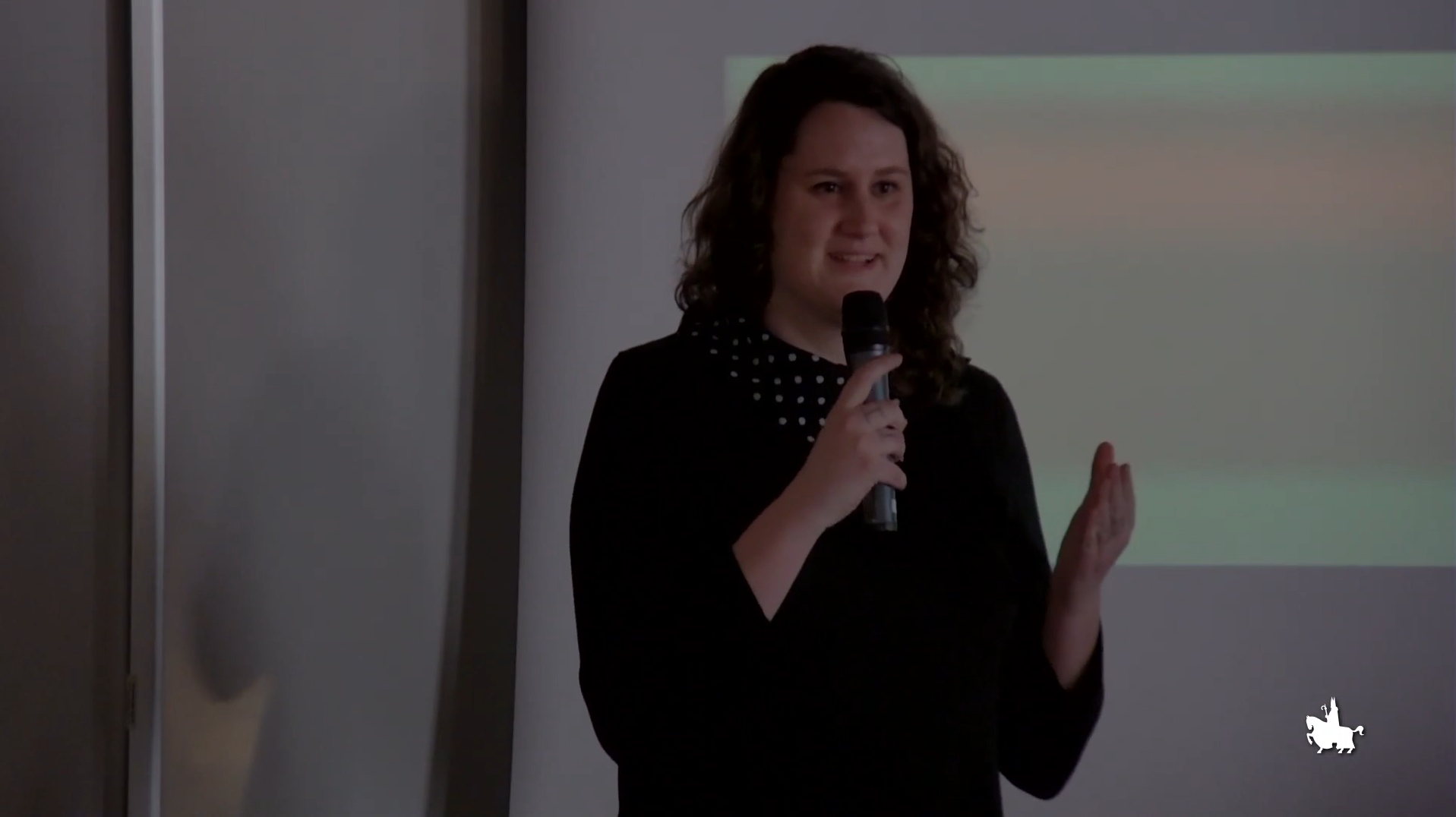 Designing in Dialogue With Other Games (video; June 2018)
A talk given at PRACTICE 2018: “Dream Askew began as a remix of the themes and world of Apocalypse World, telling the story of an apocalypse that was human, queer, and already here. In developing the game further, Avery partnered with Benjamin Rosenbaum, who was now working on his own game: Dream Apart, about fantastical Jewish shtetl life. Now, in the process of preparing the two companion games for release, Avery looks back at the process. Is her game still powered by the apocalypse? In what ways have Dream Askew and Dream Apart been iteratively informed by one another’s development? What changes when you develop a game in dialogue with other works in progress? What new legacy are Dream Askew and Dream Apart creating for other designers?”

Design Wisdom From Elsewhere (slides; March 2018)
A talk given at Fastaval! “Look to your edges, where overlapping ecosystems create strange and unique possibilities. Join game designer Avery Alder in uncovering the game design lessons embedded within a handful of other disciplines and practices: permaculture, sustainable eco-design which works with rather than against natural systems; narrative therapy, which uses the multi-storied expertise of the patient to find solutions; and Theatre of the Oppressed, which dissolves the boundaries between actor, audience, theatre, and revolution. What can we learn about game design from looking elsewhere?”

Designing Queer Games (slides; March 2018)
A talk given at Fastaval! “Game designer Avery Alder opens this talk with a question: whose politics and experiences are we building our games around? After examining the importance of queer representation in games, the talk will take a critical look at why representation isn’t enough. From there Avery will point toward how game systems can be queered, reflecting the politics and lived experiences of queer lives. Examples will be drawn from the past ten years of game design.”

Beyond the Hero Form (annotated slides; Oct 2017)
Presented at DePaul University, I gave an hour-long talk on how our narrative models reflect worldviews and politics, and how we can design tabletop roleplaying games that challenge us to pay attention to and subvert those models. A mixture of literary theory and a survey of over a dozen innovative games that break the mold.

Panel: Queering Games (video; Oct 2017)
As part of GauntletCon, I participated in an hour-long panel with River Williamson and Richard Ruane. We talked about queer representation, queer embodiment, and queer mechanics in tabletop roleplaying games.

Beyond Representation: Queer Mechanics in Tabletop Games (video; Oct 2013)
This talk was given by myself and Joli St. Patrick at Queerness & Games 2013. I went on to develop these same ideas further and present again under the name “Imagining Ourselves.”

Imaginary Funerals (blog post; 2009)
A blog post about how roleplaying games create experiences which we are free to reflect upon or to simply bury without ceremony.

I love facilitating groups, bringing people together in discussion and experimentation. Below you’ll find several of my workshop outlines and resource guides.

In May, I’ll be facilitating Designing Games That Matter in Nova Scotia for the second year in a row. Come join us!

Want to bring me in to lead a workshop? Learn more here. 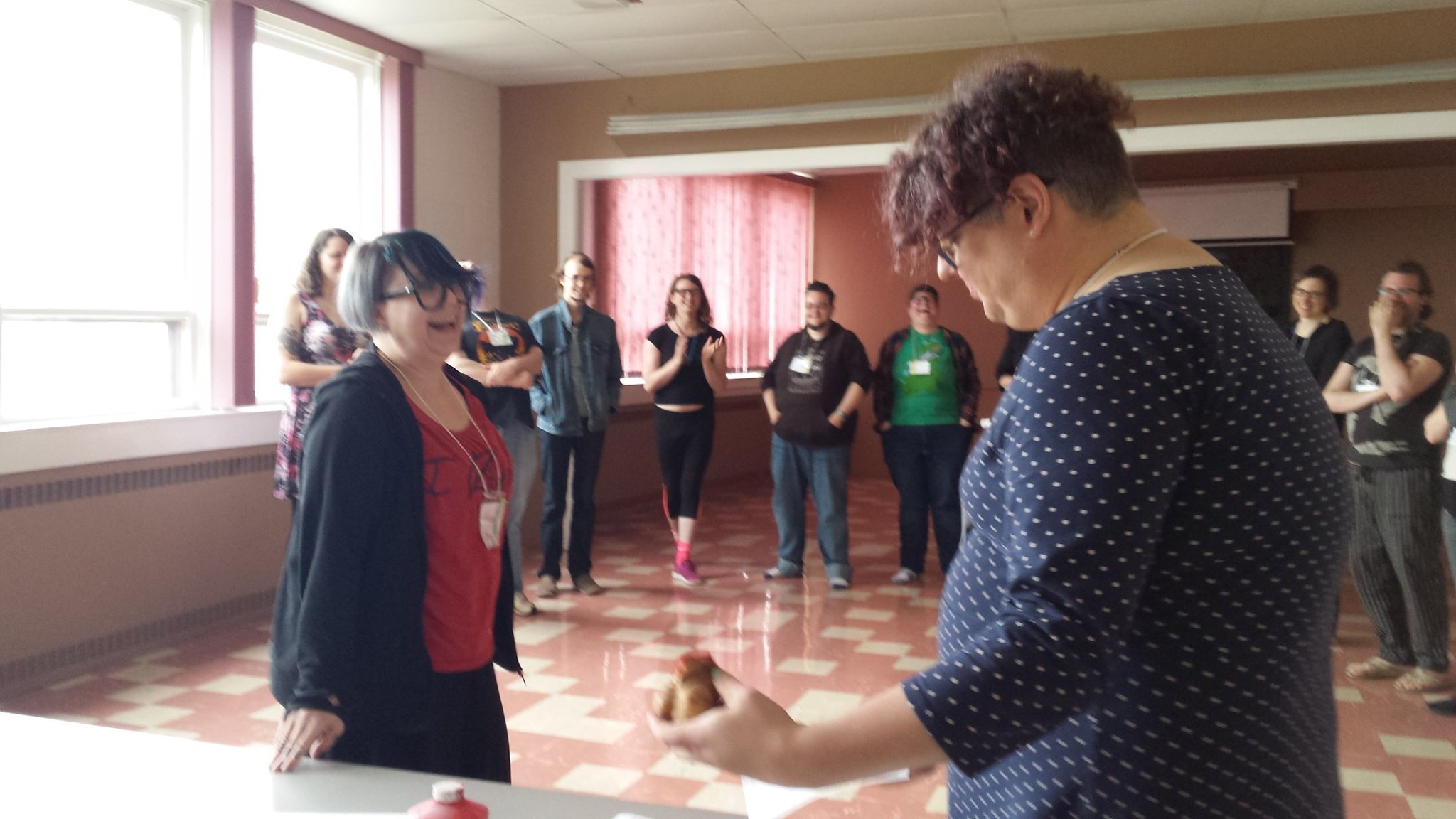 Designing Games That Matter (May 2019)
A five-day game design intensive that took place at Tatamagouche Centre in Nova Scotia. Participants were challenged to identify the politics embedded in game mechanics, to design in a discovery-oriented way, and to produce games that are focused and intentional in what they do. To see a report on the intensive, click here. Want to learn more? Click here for all the program materials (outline on pages 1-5, resource list on pages 6-10, worksheets on pages 11-14).

Bringing Roleplaying to Everyone (Nov 2018)
Following up on last year’s weekend intensive at Tatamagouche Centre in Nova Scotia, I returned to lead another weekend-long workshop, this time focused on hosting and running games. We explored how to invite first-time players to the table, act as a welcoming host, assess and build on player interests and skills, and keep the game engaging and accessible for diverse audiences.

Designing Transformative Games (June 2018)
A day long workshop held at NYU Game Center, an exploration of how to design roleplaying games that transform their players and the wider world. Drawing from sourcing ranging from my own design work to lessons gleaned from other disciplines, including narrative therapy and Theatre of the Oppressed. Alternating between lecture, group discussion, and breakout activities, this was a day for honing craft and finding new inspiration.

Liberatory Story & Play (Nov 2017)
A three-day intensive that took place at the Tatamagouche Centre in Nova Scotia. Eighteen participants dove into new roleplaying games, learned how to run and also host games, developed some critical insights into the transformative power of games, and explored techniques for adapting roleplaying games to different settings and curriculum.

Designing For Empathy (Oct 2014)
This workshop was made possible by Possibilities Calgary, and was first put on in October 2014. The workshop gets participants to think critically about the role games can play in fostering empathy, and gets them started on their own collaborative game design projects.