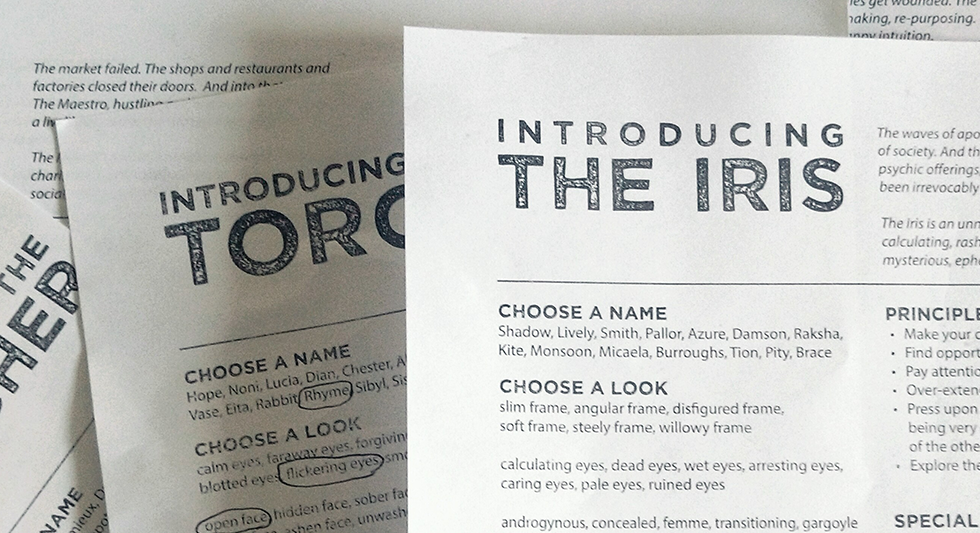 This post is an attempt to sketch why story games are significant to me.

Before I do that, a quick breakdown of the term: story games are tools we use to have fun, tell stories and roleplay. They use rules (many centered around chance) and structures to guide players to the same creative page, and to shake things up and provide the unexpected. Someone once described them as “instructions for using your imagination” (Nathanael Phillip Cole) and someone else once described them as “stories you play” (Matt Snyder). I like both of those descriptions.

Alright, for those of us who are invested in the definition of the term, let’s not get caught up on it right now.

Here is something that I find a lot more accurate and resonant than either of those suggestions. Roleplaying games create experiences. Experiences that we haven’t had the opportunity to live through. They allow us to recontextualize our paradigms, challenge us to see things in a new light, explore the causality of something, regardless of how realistic that something might be.

This was put really well by a man named Malcolm Sheppard: Memories are unkind. Even the sweetest ones are tinged by the fact that the experience has fled. A memory is a funeral for experience. Roleplaying games are designed to create those funerals. It’s the way they work.

Awesome. I’ve been using the moniker/label Buried Without Ceremony for various projects for a while. When I read that quote by Malcolm, I was suddenly filled with this sense of “yes!”. This is the very same sentiment I wanted to communicate.

Roleplaying games/story games create experiences. We live them for a moment, they die as we return to our actual selves, and we promptly bury them without ceremony. These are phantoms that have existed for us alone, and the joy of it all is two-fold. We owe them nothing. We can take from them what we want to.

Do we feel the need to draw something poignant out of our sessions of play? No. Could we? Yes. No matter what we choose to do with those experiences, we cannot be accused of being selfish. We created them in order to bury them. Everything else is what we want to make of it.